The first race in 1951 is the Milan-Turin, taking place on the 11th of March. Right before the arrival, when covering the last lap in the Turin velodrome, Coppi falls down and breaks his collarbone.

He recovers just in time to participate to the Giro d'Italia, starting on the 19 of May, but he comes only fourth, due to the accident and to the poor training.

The Giro del Piemonte begins on June 29th.
Fausto and Serse Coppi, his brother, are a few hundred meters from the arrival but right before running the final sprint Serse bumps into another competitor and falls, hurting his head on the pavement.

Serse Coppi stands up after few seconds and he does not seem seriously injured. After a couple of hours, though, in his hotel room, Serse feels sharp pains in his head and starts complaining louder and louder.
A Serse Coppi doctor comes and calls an ambulance to take Serse to the hospital but it's too late.
Serse faints while doctors are visiting him and they cannot even try an operation as he dies few minutes later for cerebral haemorrhage. 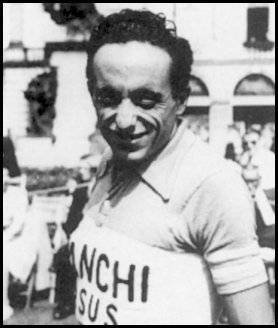 Fausto is shattered to the point that he considers to leave the Tour and the races once forever: Serse was not only the one he shared his youth with but also his favourite team-mate.
Nevertheless, after a few days, Fausto Coppi changes his mind and participates to the Tour de France -- maybe to exorcise his brother's death and recover from the pain he feels -- but he is not competitive, motivated and trained.

The worst crisis comes during the 16th stage, when he's not even able to stick with the group, also because of the very hot weather. Any help provided by his support riders, as Andrea Carrea, Ettore Milano and Biagiotti is useless.
Coppi arrives half an hour later than the group, leaded by Koblet and only 5 points prevents him from being eliminated. The Tour is not finished yet; in the next four stages Fausto shows all his temper climbing alone the Izoard and Vars even though it's now impossible for him to win.
He comes tenth in Paris, after the last stage, with a total delay of 46 minutes on Hugo Koblet, the winner. The last goal for this year is the World Championship -- the only race he never won in his career -- but he's very unlucky again: he gets ill and cannot participate.